Just When I Thought I'd Seen Everything - There's the Ovipositor

What's fun about sex and sex toys is that you've never really seen or heard of everything. Thee will always be something that's new to you.

Last week, I ran across something that was new to me - the Ovipositor. 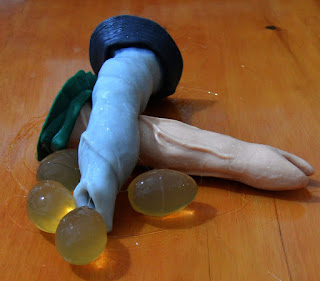 If the picture is not doing it for you, let me explain. This is a toy that simulates the experience of an alien laying eggs inside your body. Yes, you read that right - this is a thing. I'm actually not all that surprised by this. There are lots of people that are interested in science fiction and the idea of aliens. Some people have sexual fantasies about this. Why wouldn't they? It makes a lot of sense to me that some people would find the idea of sex with an alien creature exciting. It's the ultimate in the unknown - which is erotic to a lot of us.

But when I first saw this picture, I was a little concerned. My first thought whenever I see supposedly weird toys is not whether it's weird or disgusting or whatever some people might say about it - it's whether the toy is good quality and safe. This looked decidedly unsafe to me. I was concerned about what those eggs are made of, what the slimy substance that appears to be all over them is made of, what the egg-layer itself is made of, and where the heck people are putting those eggs!

But I read a review of the ovipositor and then went over to the site of the people that make it, Primal Hardware. I can't say for sure because I've never had one of these toys in my hands, but from everything I read, it seems like they know what they are doing. The toy is made from 100% silicone so it will be durable and easy to wash. I don't know how easy it is to get down into the bottom of that tube to wash it, but the material itself is washable and body-safe. The eggs are made from unflavored gelatin. The toy comes with an egg mold so you can make your own eggs. The gelatin, if you make it with no sugar and no coloring in it, should be safe to put inside the body. It dissolves quickly in body heat so it will just disappear. Now I honestly don't know about any health issues of putting that much gelatin in your anus or vagina and letting it dissolve. I doubt that it would cause any serious issues. They do say on the site that you can also make the eggs out of ice. That's probably not a great idea. It wouldn't cause serious damage but that's a pretty large ice cube directly against sensitive tissue. That could be very uncomfortable and could cause a bit of a an ice burn.

So, given that the toy seems mostly safe, or safeish, why not? If you have a fantasy of having an alien lay eggs inside of you, you're going to have a pretty tough time making that a reality. This is probably the closest you're ever going to get. And if this is exciting for you, this toy is probably pretty cool.

You won't find an Ovipositor on the shelf in your local sex shop though, you'll have to get it on-line.