We looked into it a little and found that yes, in some rural areas in China and Taiwan, live entertainment at funerals is very popular and sometimes that live entertainment includes women who dance with next to no clothing on. Anthropologist Mark Moskowitz made a whole documentary about it. He says that he never saw anyone dancing naked in Taiwan but he believes that's because he was filming and the Taiwanese government has made it illegal to get completely naked. Everyone he spoke to about the phenomenon said that they had certainly seen entertainers get down to their birthday suits at funerals.

If you belong to North American culture like me, it sounds really weird. We are pretty somber about death and we get twisted about combining death with any kind of pleasure or enjoyment, and REALLY skeeved out about relating sex and death. In fact, when I first heard it, I thought it was one of the funniest and strangest things I had ever encountered

In a way though, it might make some sense. Moskowitz says that there are many reasons people hire strippers for funerals. One is that they want the funeral to be successful, to be a great event, to show that the person who died was loved and that the family could put on a popular event. Live entertainment, particularly that including exotic dancers makes for a loud, fun party. Another reason is that funerals are often viewed more as a celebration of a person's life than a grieving of their absence. What not have a party? Another, and this made a lot of sense to me, is that the person who died might have been someone who enjoyed that sort of thing in life, so why not have it at their final party? This made me think that perhaps I should have strippers at my partner's funeral (should he outlive me). People might be scandalized at first but somehow I think they would get it.

Believe it or not, this was not the weirdest sex related thing I came across this weekend. Not by a longshot actually. 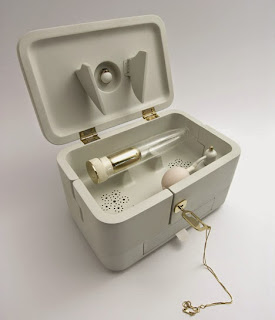 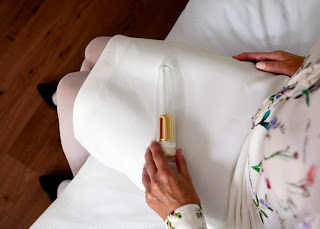 There's not much that confuses me when it comes to sex, but I have to admit, I'm baffled by this. I certainly wouldn't judge anyone who felt like they really wanted to jack off with the ashes of their loved one, but I have to admit I don't understand it.

It's not like these are exactly flying off the shelf though. 21 Grams (yep, that's the name, not morbid at all, right?). Is a one-off design. You can't just pick it up on Amazon. You have to contact the designer and have him make you one. I think I'll pass.