I just ran across this little article today about a woman who has started a kickstarter campaign to produce a line of 'consent panties'. The panties are in various styles and they bear pro-consent message like 'ask me first', 'talk to me', and 'consent is bootyful'. Her line was inspired by a on-line prank last year that led people to believe that Victoria's Secret had put out a line of consent panties. Amulya Sanagavarapu thought it should be real. 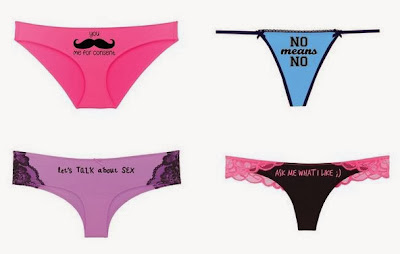 Will consent panties actually do anything to prevent sexual assault? Probably not directly, no. But it can't hurt to have these kinds of messages around to encourage people to think about and talk about what consent really means. I'd wear them.

Contrast this idea with an indiegogo campaign that was in the news a few months ago. This group wants money to produce a line of anti-rape jogging shorts and pants. They claim that the material is impossible to tear or cut, even with a knife. The short and pants are form-fitting and outfitted with a mechanism that locks them so they cannot be pulled down or taken off, except by the person wearing them. There are numerous videos that show how they work and even show someone trying to cut them with a knife. These pants are indestructible! It's brilliant, right? Not! This idea just feeds off of all the myths we carry about sexual assault - that it's perpetrated mostly be strangers, that rape is almost always violent, that sexual assault is just about whether a penis goes into a vagina. It completely ignores the other ways assaults can happen and the terror that someone who is being assaulted goes through. My partner made an excellent point after viewing the video with the knife. He said 'If someone is trying to tear your pants apart with a knife, you've got a very serious situation going on there and you're going to get hurt, whether or not they can get those pants off.' He's right. The pants will do absolutely nothing to prevent an assault like that. It's already happening. And I think most people when threatened with a knife would take the pants off themselves rather than risk getting seriously injured or killed. I know I would.

So no, I don't think either of these is a solution to actually prevent rape but the first one has a far better chance of doing some actual good. Those panties at least will get people talking about the realities of consent and sexual assault rather than keep them bogged down in myths.