It's a Shame There's So Much Shame 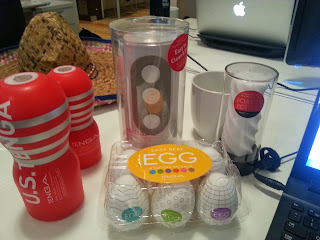 One of lovely facebook friends posted an article this morning that caught my eye. It's an opinion piece about an opinion piece about a review of male sex toys. Confused? Okay, what happened was, a guy named David Corvucci got a bunch of Tenga masturbators and wrote of review of his experiences of them. Then a woman name Erin Gloria Ryan, wrote some rather nasty things about it on Jezebel. Then a guy named Brian Moylan blasted her on Nerve There's so much here that I don't even know where to start but I know that I can try to start by saying that I read all three pieces. It is a HUGE peeve of mine in these days with so much information available to us that people never bother to read it. They see a headline, get their shorts in knot and lose it all over the internet. I didn't want to be one of those. So I went back to the Jezebel piece and read that and then back to the original piece and read that. I do have to say that I think Moylan is somewhat misinterpreting both pieces.

There's a lot of stuff in all three of these but what strikes me is the incredible amount of shame and judgement in all three of these posts. According to Corvucci, he did not get the toys to review because he loves toys and he wanted to give a real review of them, he did it as a joke. The whole tone of the post is very dismissive of any man who would actually use such things. Many times he states that he's curious and he wants to use them because, after all, Tenga was nice enough to send him over $200 worth of toys, but he is scared that trying them will turn him into one of 'those guys'. The kind of guys that fucks Japanese sex toys in closets. The kind of guys that 'brings a girl home and before she even has her bra off, asks her what kind of lube she likes'. The kind of guy that firefighters would laugh about when they find his toys in his burned out apartment. Some of what Corvucci has to say is pretty funny. His descriptions of the toys as seen through the eyes of someone who has never used or even seen such a thing before is quite priceless. But it relies heavily on the idea that using these toys constitutes some sort of perversion. His trepidation about become a pervert is the central joke. I find that whole notion offensive and just sad. What the hell is wrong with fucking a Japanese sex toy? Those toys are really cool! Most human beings masturbate. Corvucci says many times that he masturbates at least once a day. So why is that normal but using a device to do it is not?

Then Erin Gloria Ryan puts in her two cents on Jezebel. That very short post is so poorly written (this is reason why I rarely read Jezebel anymore) that it's hard to understand exactly what her point is. But it seems apparent that she too thinks that men who fuck Japanese sex toys are perverts and 'chair-sniffers'. She berates Corvucci for doing it even as he berated himself. I can't for the life of me understand why she felt this was necessary. Corvucci's piece was just a humor piece about his experience with some toys. He wasn't making a political statement. Why she picked this post to comment on is beyond me, other than perhaps she's desperate for something to write about. Why bother to pick this out and further hammer on the idea that male masturbation is perverse and disgusting?

So that's kind of Brian Moylan's point. He takes Ryan on for criticizing Corvucci. He also talks about the shame that Corvucci heaps upon himself and asks where this comes from. He explains clearly and simply why a man would want to use a Tenga FlipHole rather than just his hand - because it fucking rocks. He says the orgasms that come from using a Flip Hole are far more intense than when he uses his hand. If you knew that was possible why in the world wouldn't you do it? This is how I feel about my toys. I use it because it does something that I cannot do without it and that something is something that I like very very much.