I decided to write this post after spending 3 hours last night poring over on-line toy catalogues looking at possibilities for new products to bring into the store. After three hours, countless different companies, and approximately 2000 products, I came up with a list of 8 I would look at. Sigh. There's so much out there and yet there's just not much out there. People who don't work in this industry are under a lot of false impressions about what is actually out there for sex toys and what they can really do. Here are the top 5 things I am asked about that just really do not exist in the toy industry.

1. Sex dolls. It never ceases to amaze me how often I am asked about blow up dolls. People usually want them for gags for a party of stag but even then, they would like a doll that is somewhat realistic and fun looking - perhaps with real hair etc. I have to tell you, this doesn't really exist. There are a lot of blow-up dolls for sure but they are cheap and nasty. The boxes show pictures of voluptuous women in seductive poses like this: 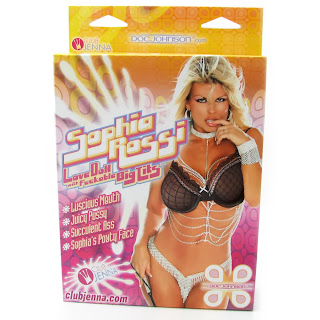 But when you blow it up, you get this: 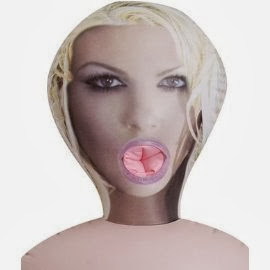 mmm, sexy! I don't deny that some might find this really hot, but for most people, that's not what you would be anticipating by the picture on the box. But hey, what can you expect for $25?

The soft rubber types of dolls that you sometimes see in movies don't really exist. The only option for soft rubber dolls is to just get a part of the body - the boobs or butt, etc, or to buy one of the silicone 'real dolls'. Those will set you back at least $1000.

2. Vibrating Panties. This type of toy does exist but it's not the kind of thing people think it is. Thanks to the movie The Ugly Truth, people think that there are pretty lace panties out there with tiny vibrators in exactly the right spot that are operated by a remote control with all kinds of customizable speeds and settings. There isn't. The only remote control panties that exist right now are not particularly pretty and they come with very large, cumbersome bullets that usually have just one speed. It's a cute idea but it doesn't do the types of things you'd really like it to do. The only decent remote control toys out there - that have a good range, don't eat up their battery life in 20 minutes, and are quality, reliable toys - don't come with panties and are larger than most people would like to put in their panties. I always suggest the We Vibe 3 or 4 for this purpose because it stays in place and can be worn under clothes. It doesn't come with panties, but it doesn't need them. Panties can just go over top. Or you can go without completely.

3. Computer controlled anything. I'm not sure where people are getting this from but there is definitely an idea out there that there are remote computer controlled vibrators. I have been asked many times for 'the toy' that you can control with your computer by the internet. It doesn't exist. I think it will but it doesn't yet. I also think that when it does, it will end up being a big disappointment. What we do have so far are toys that connect to your computer and receive input from specifically designed porn movies that make them move in sync with the movie. There is also a toy that vibrates when your cell phone is called and keeps vibrating until you hang up - as long as its within range of your phone. There is a toy that can be controlled by your Nintendo Wii remote. There is a company that's developing underwear with vibrating sensors in it that can be controlled by an app on a cell phone from anywhere in the world - not directly in range of the underwear. That's not on the market yet though. As far as technology has come, the computer controlled or wifi connected thing just hasn't happened yet.

4. Large condoms. I know, you'd think this would be a cinch, but it's not. In Canada, the standards for approving condoms include some fairly strict regulations on the size which greatly restricts the range of sizes that can be produced. Most large size condoms are, at the very most, 5mm longer or wider than the standard. That's not a lot. We seem to be under the impression that there are condoms in every size and shape but sadly, it's just not true. There is a company that makes condoms in 99 different sizes but they aren't approved for sale in Canada.

5. This isn't really a specific product thing but it is a common misconception that I wanted to include. It's the idea that because a product has been advertised a lot or endorsed by a particular 'sex expert' it's really great. Many many times I've had to explain why we don't carry a product that has had a lot of hype or been featured on a television show. Anyone can pay for advertising. It doesn't mean their product is good. What some people fail to realize is that when you see Laura Berman or Dr. Oz or Sue Johanson promoting something, they have been paid to do that. I will give them the benefit of the doubt and say that some celebrities accept a promotional contract because they've checked out the product and believe it's good. But I know that is not the case for most because some of the products they endorse are terrible. Dr. Oz had a prolonging spray featured on his show. Prolonging sprays are just numbing agents that might work to delay ejaculation but only because the guy can't really feel anything. Laura Berman has an entire toy line that are direct copies of other toys produced by the company that makes her line. There is nothing special about those toys. The Magic Banana has been in all kinds of magazines and promoted by many celebrities as the best kegel exerciser ever. But the Magic Banana is just a piece of plastic rope inside a plastic tube. It's not really effective at all. The Hello Touch by Jimmy Jane was one of the most talked about toys of 2013 and yet that toy is basic, cumbersome and fragile. It's certainly not the best toy of its kind on the market. Hype is never a good indicator of whether a toy is good or not. You can only get that information from toy retailers and bloggers who really spend a lot of time playing with and testing toys.

All this is not to say that there are no good toys on the market. There absolutely are. And now is a great time for toys. New, innovative companies are coming on board and bringing in new materials, motors, and designs that are making toys so much better than they used to be. However, those toys are the exceptions. The vast majority of products produced in the industry are just slight variations on things that have been around for decades. As it stands now, these things are just not around. But I have hope that one of those brave new companies will turn their attention to these things that people are really looking for.