I saw a facebook post this morning about some ads for the Vancouver World of Science's Sex Exhibit that had been taken out of buses. The ads that I saw looked like this. 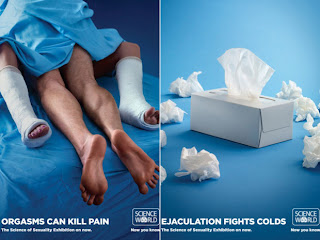 When I first saw this, I thought it was another case of people needlessly getting their shorts in a knot about something sexual. They are pretty harmless, silly ads. Yes, they are a wee bit racy but they are funny. I thought the objection is probably about kids seeing these and getting 'bad thoughts' in their little heads, or asking uncomfortable questions. I don't think kids under 13 are really going to understand them and kids over that age already get it and are probably just going to laugh or ignore it. What's the big deal?

But then I looked into this a little more. The exhibit is actually not for adults. It is designed specifically for adolescents aged 12 and up. It is a sex education exhibit. I thought, judging by the ads, that it was geared to adults - that it was about detailed interesting science-y things about sex. Now I haven't seen the exhibit but I've read the page on the Science World website and it says clearly that this was designed to help answer questions that all kids have. It is not explicit in any way and addresses basic questions about bodies and sex.

So here's my issue. The ads do not at all suggest that. I saw these ads and thought it was a bitch that I'm not in Vancouver because I'd really like to go see that. It seemed like it was an adult-appropriate exhibit about new discoveries, and the science and sociology of sex. I would have been surprised and rather pissed to walk into an 8th grade level sex education exhibit. The ad is not hitting the market they are looking for. I think they want to get the attention of the adults who will be the one taking their kids. But if I saw that as a parent, I would think I should be leaving my kids at home. Totally sending the wrong message. 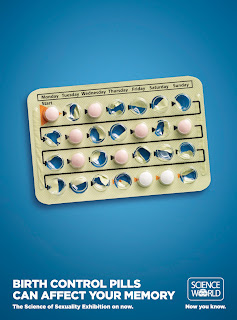 This was the one that no one seemed to have a problem with and that made it into the buses (or bus shelters, I'm not sure). This, to me, is far worse. What in the world is funny about a drug messing up your memory and causing you to miss taking that drug which might cause you to have and unintended pregnancy. That is simply not funny. It's not that it's funny and I shouldn't laugh, it's that it's just not funny. It's also stating something that is supposed to be interpreted as fact when the truth is much more complex than that. It's hard to tell from the ads exactly what it is that's being advertised until you read the very bottom about the exhibit. Only then would you get that it's an attempt at a joke. It's not funny to the hundreds of thousands of women who take birth control pills who have never heard of such a thing and might read that and think 'What? What does that mean? Is that true? WTF?'. What do they mean by this? Don't take birth control pills because they'll make you forgetful and then you'll get pregnant? It's confusing and it totally misses the mark. And again, it is not an effective ad for the exhibit. I am not a humorless loser - I do think the first two are funny. But this is not funny.

As if that's not bad enough, then there's this.

I don't understand a world where people have a problem with a picture of a box of tissues with the word ejaculation on it but they don't have a problem with an ad that suggests that female health professionals 'treat' their patients by having sex with them. I can't even imagine what the people at Vancouver World of Science were thinking when they allowed this to be produced. It is offensive to women and to all health care professionals. And it is offensive simply in the name of making a cheap joke that's not very funny. They could have easily used that same tag line about orgasm easing pain and made a really funny ad about not needing the aspirin anymore or 'let's have sex honey, I have a headache'. Why do you have to use a tired, sexist and offensive trope about female nurses and physicians to do it.

So I guess my tune on this changed pretty fast. I don't think those first two ads should have been banned just because they're racy, but I do think that they are misguided and ineffective. I also think that Vancouver World of Science should know that the video is sexist and offensive.