Every toy news mag, site and blog I have looked at in the last week has featured the new JimmyJane toy called Hello Touch. Seriously, you can't get away from this thing. Absolutely everyone is talking about it. A psychologist friend just told me that the urologist she works with is telling people to buy this toy. So I thought I should put in my two cents on Jimmy Jane's 'Hello Touch'.

The first time I saw a picture of this toy, I immediately dismissed it. I knew right away that it was something we would never bother carrying. After almost 14 years in the toy biz, I can tell pretty quick when something is not worth my time. I would have ignored its existence altogether except that JimmyJane is such a wunderkind with the media that it's become quite impossible to ignore. So I haven't actually had this toy in my hands. Let's just get that out of the way to be fair. Never having seen this thing, I could be wrong, but I doubt it.

If you happen not to have seen it yet, this is it. 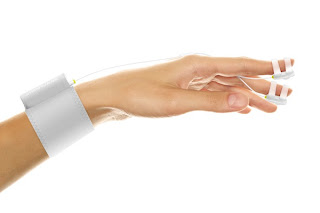 Oooh, ahhh! It's so space-aged! It straps to your fingers and makes them vibrate. The press releases on this toy are describing it as the best technological advance in toys in years. Really? There are two things wrong with that statement. First of all, there's this:

Seems somewhat similar doesn't it? This toy has been around since before I started working with toys. So I would beg to differ that it's all that terribly new. But that's not news for Jimmy Jane. Nothing they've done has been new. In fact the vast majority of their toys are actually exact replicas of other company's toys made for them by those manufacturers and packaged under the Jimmy Jane brand. Jimmy Jane is not the first name in innovation. 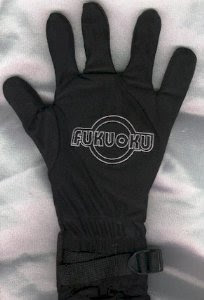 So yeah, not all that new. One of my big beefs with Jimmy Jane is not just that they copy everybody else's designs, it's that they then put them in fancy packaging and think it justifies doubling the price. The yoni toy is $34. The Hello Touch is $67. The Fukuoku, which contains 5 vibrators instead of two and is much more powerful and durable, is $67.

I have some concerns about the Hello Touch. It seems like it would be very easy to break. The cords are small. I know how I treat my toys and I know better. It would probably last about two uses in my house. It also uses an extremely rare AAAA battery. It comes with one but of course, that's going to die eventually. AAAA batteries are very hard to find. For that reason alone, we won't carry this toy. A $67 toy that is essentially one use is not good value. I read a review that said that the buttons on the toy are hard to push - so it would be hard to control. I also have a problem with overly complicated toys. To use this thing, you have to strap three different parts to your hand. That may seem like no big deal, but when you just want to get on with it, that's a lot. This is kind of like the 'Fixsation' - that's a little vibe that fits into a garter type strap thing. I kind of liked the toy, it felt good. But it took me a good 15 minutes to get it all together and get the straps on straight. I've never used it again because of that. I also don't see a lot of multiple use potential with the Hello Touch. The vibes are teeny tiny and would really only worked when strapped to fingers. I like toys that can be used in a variety of ways.

So second, of all, on the innovation point, have the people who are claiming this is the most innovative toy in years ever seen this? 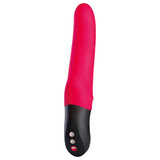 This is the Stonic Eins from FunFactory which actually moves back and forth. That's right. It moves! It pulsates, gyrates, physically moves in and out of you.

This is the Lelo Tiani - a toy with a wifi remote that responds to movement. It's the nintendo Wii of sex toys.

The Hello Touch can't even compete in the same playground as these toys in terms of innovation.

The hype on this toy is just that, hype. Having said that, Jimmy Jane does produce well built toys. I don't like the designs and I think they are overpriced but they are decent quality. So the Hello Touch is probably not junk like so many toys - it's probably just very fragile and would have to be treated with great care. I actively discourage people from buying Jimmy Jane toys but if this is one that you really think is right for you, it's likely to be all right. It's certainly not dangerous. You just might never be able to replace the battery.

Never buy into the hype around toys. The press is almost always because the company has good press connections, not because the toy is that good. Find a store that will put the toy in your hands so you can find out exactly what its all about before you buy it. Or a store like ours where they make considered decisions about which toys to get - you'll find that some of the most talked about toys in history aren't at the Tickle Trunk and there's a reason for that.