I just returned from a trip to Las Vegas for the AVN trade show (so happy to be home). One of the big highlights of the trip was getting to finally see Cirque du Soleil's Zumanity. I've wanted to see it ever since I first heard about it but the show only plays in Vegas. Last time I was there, I chose Prince instead of Zumanity (totally worth it). But finally, finally, I got to Vegas and decided to ante up for tickets. Wow, am I glad I did.

If you haven't heard of this show, it's basically Cirque du Soleil with boobs. It's the same format, the same amazing acrobatics (or maybe even better) but the show is themed on sex and sensuality. There are lots of nearly naked performers and extremely suggestive acts.

What really struck me in watching this show is how utterly amazing the human body is. In most strip clubs and burlesque shows, you just see naked bodies. If you're lucky, you might see naked bodies doing beautiful dances. In this show, you see highly trained athletes really exploiting what their bodies can do and really pushing the limits of physical experimentation. Whenever I've watched Cirque performances on TV, I've always kind of thought about how sensual a lot of what they do actually is because the performers are so finely attuned to their bodies. They know exactly how they work and what they can do with them. They can flex and articulate and use every little muscle and joint. Their bodies are modes of expression. In Zumanity, the performers get to really show that off. They get to play up the sensuality of what they are able to do with their bodies and how that relates to sex. And it's super freakin' hot! 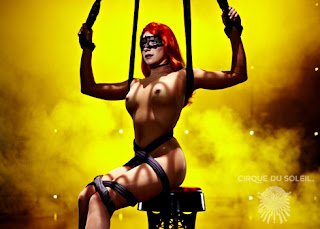 My favorite act - although I loved them all - was a woman doing a solo performance in ropes. There were two long ropes of loops that she was using for an arial act - sort of like their traditional silk arial acts, but a little different. She was almost naked - or appeared to be anyway. The music was very slow, subtle, and sensual, and most of the soundtrack was just delighted and tortured moans and sighs from a female voice. She twisted and knotted herself up in the ropes, almost as if she was being bound by a lover, and yet also by herself at the same time. She was hoisted into the air, all trussed up in those ropes and did a breath-taking routine of twist and dives and spins, moving up and down from the top of the theatre about 6 stories up, right to the floor. The peaks and valleys, twists and turns were just like the exciting roller-coaster of amazing, sexual experience when you are completely immersed in the moment and the sensations. It was captivating and ridiculously sexy.

Several years ago, I went to a live sex show in Amsterdam. I was kind of worried about it because I thought it was be so extreme that I would be uncomfortable and I was worried about maybe getting really turned on by it, and how would that look? But as I watched the show, I realized there was nothing hot about it at all. Yes, people were having sex, right there on the stage in front of me. But that's all they were doing. The performers didn't seem to even want to be there. It was very mechanical and not sensual at all. It was boring, and somehow a little sad.

Zumanity was much hotter than the live sex show. The performers were not just showing off their naked bodies, they were expressing themselves through their physicality. They were enjoying what their bodies could do and it really looked like they were enjoying each other too. One of the acts was a silks routine where a man was in the air in the silks and the woman below was assisting him but playing the part of his lover. The scene was like a beautiful love song in motion. At one point, he simply wrapped the silks around his arms, took a few running steps and was pulled up into the air and soared around the theatre. I thought that must be as close to flying as a human being will ever come. It was gorgeous.

If you ever get the chance, see the show, it was mind-blowing.