Lelo Gets it Right the Second Time Around

When the Sense Motion toys from lelo came out, I was so excited because I have been looking everywhere for a good quality remote toy. This was Lelo so of course it was going to be good. At first, they seemed amazing. They vibrated to the motion of the remote! They had a commercial that hit youtube that shows a guy dancing with the remote and driving his partner mad.

How fun is that?

Sadly, many of us found out that the Sense Motion toys weren't quite as awesome as all that. They worked well for a lot of types of play but most of them had major problems with interference. If you put the remote in your pocket or the toy in your pants (or in you), often they would lose the remote connection and you'd have to get the toy and the remote close together to get it going again. They were nice toys but they just weren't as good as they should have been.

About a month ago, Lelo announced they were putting out an upgrade - a second version of the Lyla, Tiani, and Oden Sense Motion toys. We finally got them in this weekend and I'm super-psyched to say, it works!

First of all, these toys are stronger vibration. So that, in and of itself, is reason to get it. 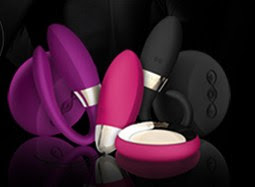 But the remote is so much more responsive and it's not sensitive to interference! When this works the way it's supposed to, it's super-cool. With other remote toys, it's lots of fun to give the toy to your partner and change the settings and watch them squirm. But with this one, you don't just change from one speed to another, you control exactly what happens to the toy by the way you move it. Even just a little shake or turn of the toy changes it. It's so much fun!

I had to test it out so I had my partner put it in his pocket and do a little dance for me. It worked! I was vibrating to his movements. Then he got really crazy and started jumping up and down. It was awesome! I ran into the other room to see if we would lose the connection. Nope! It still worked through the wall - I could feel all of his jumping around and dancing. I think this is going to be the new workout trend.

Oh how I wish Lelo had not jumped into production on these toys until they figured out how to do it properly. When it works right, it is really amazing. This may be the most fun partner toy I've ever seen.

I have to say, I don't like the shape of the Tiani for partner sex. You're supposed to use it like a We Vibe and I find that it's not the right shape for me for that. But what it is good for is making a vibrating panties idea. By itself, the internal part of the toy is totally comfortable and it anchors it so you can wear it inside your underwear pretty easily. The external part is small enough to get away with it under loose fitting clothing. This is a great thing because most toys like this are too big and too loud to be discreet. The cool thing is, your partner doesn't even have to touch the remote. They can just throw it in a pocket or purse and everytime they move, you'll get a nice surprise.

We have only one Tiani left in the store right now. I wanted to check it out and see if they got it right. We will be getting more soon and the Lylas should be in by the end of the week.