Yesterday I had someone visit to drop off samples of toys we might like to carry. This is always a difficult thing for me because manufacturers and distributors assume that all stores are the same. They think that we will love anything that everyone else is loving. But we have a different standards than most other stores and a lot of these things people bring me are just not right for us. I won't mention any names because this was really a lovely woman with the best of intentions. But there was one thing in this bag of goodies that really stood out for me. This item is not actually made by the brand she represents but they do carry them. It's called a The Pleasure Web. Sounds awesome! But this is what the Pleasure Web is. 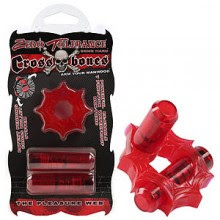 What's up with the one that is sticking straight up out of the toy? Where is that supposed to go? It looks very much like that thing would be poking directly into me - and not in a good way! If you look at the placement of the other vibe you'll notice a problem there too. The vibe is horizontal so it's not poking out at anyone but it goes directly through the centre of the ring. The is a small and very tight ring. It's going to fit tight and put a lot of pressure - that might feel okay if you didn't have this hard vibe cutting through the ring directly on top of your penis. I can't imagine this would be comfortable for anyone.

This is another case of someone coming up with someone they thought was cool but it's either a designer who has never played with this kind of toy or just doesn't give a shit. Probably both.

I do have to say that the little bullet vibe is actually awesome. That by itself might be worth the price of the toy. Ditch the stupid web ring and use the vibe, and you'll have some fun.

I also came across this today.

I understand the point and I do think it would be good exercise - but you have to admit, it looks ridiculous. Particularly the guy at the beginning who seems to have a model with a rather phallic front end.

This could be great for your thighs. It could also be highly pervertible. I'm tempted to give it a try.