What Lies Beneath - There's More to the Clitoris Than You Think

I stumbled on a picture the other day that caught my attention. 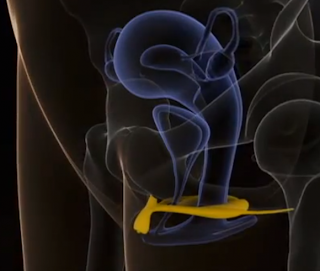 This is not modern art - well, I suppose it could be - it's actually an MRI of the female reproductive system. That yellow thing there? That thing that looks like a wishbone with wings and surrounds the entire vaginal opening? That's the clitoris. Yes, this thing that we think is so tiny and elusive is not so tiny after all.

I learned this from my sexual anatomy work some time ago and I have seen diagrams, but I have never seen the real thing in 3D. It's fascinating. Here's another view so you can get a better idea of what's going on down there. 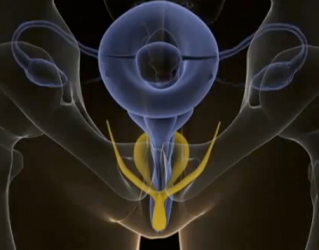 Knowing this about our anatomy really blows some of the conventional wisdom about women and sex out of the water. This is why I love telling women about this. We hear over and over again that only 40% of women can have an orgasm from penetrative sex. Almost inevitably this lovely 'fact' is followed by some advice as to how to make that happen if you're not one of the lucky 40%. As if this is the real way to have sex and if it's not working for you, you just need to find the thing that will make it work for you. But this image tells us two important things about this vaginal orgasm idea.

First, the clitoris is huge. Well, maybe not huge, but much much bigger than we thought. It's not just the head of it, the part that we see that's sensitive and wired for pleasure, it's the whole damn thing. Focusing only on the head of it is exactly like focusing only on the head of a penis. There's a whole lot more there. So for women who do orgasm easily during penetration, isn't it entirely possible, indeed, highly likely, that the penis or the finger or the toy in there is rubbing against parts of this highly sensitive clitoral tissue that surrounds the whole vaginal opening? That circle and the wing parts you see are made of corpus cavernosum (the same kind of spongy tissue inside a penis). The clit gets hard! So if it's all hard and excited, no doubt you are going to be rubbing against it, no matter what kind of sex you're having. Now, this is not to say that you should get off from penetrative sex - lots of us actually don't. It is to say, however, that if you do, it is probably not because you've learned how to do it right, it's probably because that amazing clit tissue is getting some love. The idea that there is a distinct different between a vaginal orgasm and a clitoral orgasm seems pretty silly when you look at these pictures.

Second, when you look at how this all fits together, it seems absurd that we focus so much on penetration as the route to sexual pleasure. Yes, the clit is big, but it mainly surrounds the outer structures. That awesome sensitive stuff isn't deep inside the vaginal canal, it's much nearer the surface.

What also strikes me is that most women still don't know this. This is the picture we see when they teach us about our sexuality in school. 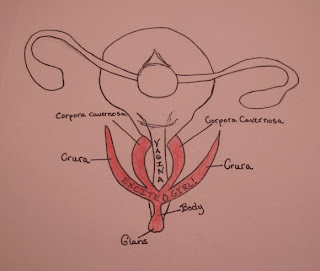 Pretty big difference, huh? This first one is sadly simplistic and lacking in some very important elements. It doesn't even show the vagina, let alone the clitoris. But if you were like me, this was the only kind of picture you ever saw. The only thing we are taught about our own anatomy is how babies are made. Everything to do with sexual pleasure is taken out. No wonder so many of don't have orgasms until we've been having sex for many years. When do we ever get the chance to know the truth about how sexual pleasure works for us?

I have made it my mission to explain this to as many people as possible. These lovely new pictures will certainly help in the quest.