A Visit to the Happiest Place on Earth

I've just returned from two weeks of trade-showing and sight-seeing in Europe and I have a ton to write about. The best part of the trip was far and away the visit with Fun Factory so I'll start there. Any fan of sex toys knows that Fun Factory was the first big manufacturer of top quality silicone toys. They are located in Bremen, Germany and they make all of their toys right there. My partner and I were invited to spend two days with them in Bremen and they took us on a tour of their facility.

First, they showed us their offices - which are all one big open space. All of the departments work together to share ideas and plan new projects. This is Verena, their head designer. She is responsible for the G4 line and the click and charge Ocean - so we love her. Verena was surprised that I was kind of star-struck by her. To me, she's a bit of a hero, having designed so much pleasure for so many. 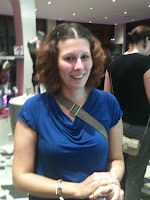 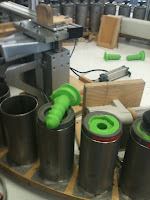 Everything that goes into a Fun Factory toy is made in Germany. Most of the components are made right there on the premises but some of the plastic caps and electronics are produced elsewhere and shipped into the Fun Factory. All the assembly is done right there by hand. Once the motors are together and the sleeves come out of the molds, the toys are assembled. 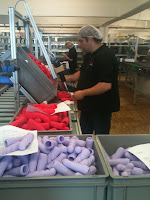 Every single toy is tested to make sure that it works. Then they are packaged up and sent out to distribution.

The site also includes a quality control section, where any toy that is sent back is disassembled and checked to determine the problem. If faults are found, the engineering and production teams are notified and changes are made to the designs.

After having spent a day in Berlin looking at all kinds of toys and talking to toy companies from all over the world - and then repeating the experience the next day in Hannover, I got a real appreciation for what Fun Factory does. There are many toy companies who don't design their own products at all - they simply buy products that are designed and produced by large manufacturing plants - mostly in China. Then they come up with the packaging and put their name on it. It's a cheaper way to run a company but it doesn't put you in the driver's seat in terms of the look and function of the toy. Producing all of the product right there also means that they know exactly what's in it and exactly how it was made. It's a much different story when you merely commissioned the production of a number of toys for which you only saw prototypes. Is it really a good product? You don't know for sure because you didn't make it. At FunFactory, every single toy was designed by them and produced by them. They put an enormous amount of care and attention into their toys and it shows by the number of copies produced by other companies. They even have a book in the Fun Factory office documenting all of the copies of their designs.

We were told that at one time, anyone could come into the factory and have a look at everything - because they are proud of their production and they want people to see what they do. In recent years though, they've closed off parts of their production in an attempt to keep some of the technology they developed themselves, to themselves. It seems there's a ton of competition in the toy industry. There are many toymakers who would love to duplicate Fun Factory's success. Copying the technology that they spent a lot of time and money on is a much quicker route than doing it yourself. They are well aware that they will never be able to stop the copycats, they just prefer to hold onto their own work for their own use as long as they can.

So that was my trip to the Fun Factory. The whole thing was like a really fun episode of that TV show 'How It's Made'.